We are to lead and to teach by example – good example.  That’s what I was taught.

What I’ve seen lately hasn’t been a movement. It’s been a disgusting show of character. Morals and values are being tossed out the window, for the sake of what? To prove a point?

The only point being proven is that society is even more polluted than we thought. It’s a sad day when families take their children to mass gatherings to witness full–grown adults behaving with such disregard to the small and impressionable minds of their children and the ones around them. 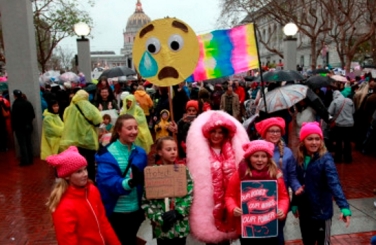 I understand that people are hurt, afraid, and offended, but that should not be a free pass to do and act however they please. Of course they have the right to protest, but if they want to make a point – a real point – that people will listen to, then they need to behave in a manner in which they will be taken seriously.

Running through the streets with vulgar hats, outfits and speech is only going to compel people with like minds to join them. What it won’t do, is compel the people in charge to listen.

Worst of all, it will teach their children that that sort of behavior is okay. The next time they don’t agree with something they’re asked to do, look out because they will behave the same way. As for the parents, they will have no right to complain about it or discipline them, because they are the ones who taught their children to be that way.

In every protest, no matter the cause, people claim that what they are doing is for the benefit of current and future generations. But, when it’s not carried out in a mature and respectable manner, then what they’re really doing, is creating a nation of undisciplined adults who will not respect nor heed to the voice of authority. A nation of lawlessness.

You think the world is bad now? Just wait.