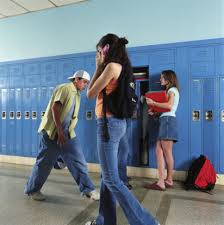 While attending my son’s parent teacher conferences yesterday, I couldn’t help but notice the clothing, or lack thereof, of many of the female students. Shorts with cheeks nearly hanging out and blouses leaving nothing to the imagination.

A short time later, as I sat across from my son’s teacher, she spoke to me of the girls in school and how distracting they were for the boys. Many parents, not the girls’ parents mind you, but the boys’ parents have been spoken to in regard to them being distracted in class.

Thankfully, no one has had to talk to my son about this. He practices excellent self control, and what a relief that was to hear yesterday. Kuddos for him!

Evidently, one girl in particular has caused many issues in class solely because of her lack of clothing and flirtatious habits. What’s the solution? Speak to the boys about controlling themselves.

That doesn’t seem quite fair to me. Why not talk to the girls about putting on some decent clothing? Doesn’t that seem a bit more reasonable, and simple common sense?

Let’s face it. Naked people cause distraction. Therefore, especially in a learning environment, shouldn’t they be required to wear appropriate clothing?

There is no way I would let my daughter, if I had one, go to school dressed like so many other girls do these days. First of all, I would want her to have self-respect. Secondly, what kind of attention is she trying to attract? Lastly, she’s going to school to learn, not to be promiscuous. Or at least that’s what she should be doing there.

Maybe all schools should implement a school uniform. Admittedly, I wouldn’t have cared for that while I was in school. However, I do imagine that it would reduce much of the competition kids experience in school. As a result, they probably wouldn’t struggle with self-esteem issues as much. It would also enable them to see their peers for who they really are; not for what they wear.

Furthermore, the kids wouldn’t be nearly as distracted and would actually learn while they’re in school. What a concept, education in school.

What do you think?

Do you have issues with how kids dress in school? Should dress codes be enforced? How about school uniforms?